Concept art for the classic monster of fantasy myth.

Recently I helped to construct a beholder for Alliance South Michigan. The goal was to get the flying eyeball up in the air to a certain degree. More than that as this was our second “backpack puppet” monster I wanted to focus on making the monster modular for easy access and reusing constructed works for more projects going forward.

First we got a design document going of what we were looking to try and do.

The idea was a pilot in all black straps into a column also in all black to have an illuminated beholder appear to “fly” over the heads of the players.  Originally the height would have checked in at over 12ft in the air. After motion testing the weight of the skeleton the frame was reinforced and dropped by about 2+ ft getting it to roughly 10ft high. This kept it in range of melee weapons… but really difficult to engage. Only the beholder itself was a viable target. The column and pilot could not be attacked. Even then an in-game effect punished melee strikes. Thus melee fighters were regulated to striking out only with their very best skills and/or protecting the ranged attacks coming from the rest of the players from the beholder foot soldiers. read more 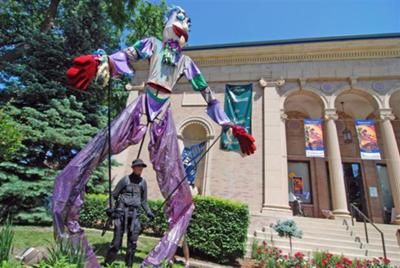 The inspiration and design came from Chad, one of our heads of plot when he saw these Mardi Gras puppets. The idea was that previous prop monsters were often using what we call “Bucket Shoes” stilts. This is where we take snow board bindings and bolt them to thick 3 gallon buckets and use them like huge shoes. This made the prop monster more combat effective but not so much that it couldn’t be handled easily enough due to how slow it was. So the monster’s card/stats had to become stupidly huge thus it was certain death to make even one mistake around their slow truging selves. Compensating with stats to make them boss-monster challenging wasn’t anywhere near as much fun as a spectacle like this should be. By example for here is a past bucket shoes monster Thomm the Troll turned ally of the town. read more

Building the Larp Boffer
-or-
How to complicate the simple effectively.

This article will just be a handful of tips and tricks to building your standard round-closed-cell-foam-and-duct-tape weapons. There are a number of advantages to these classic weapons over the newer latex weapons.

Just to name a few advantages:

On point #3 we are going to focus on construction rather than cosmetics. So I am going to quickly whip together 10 basic and ugly claw reps for our monster camp.

LARP has grown and changed a lot in the last two decades; it’s been great to watch.

A lot of these changes have focused on the sophistication of the setting. With specialty shops, like Dark Knight Armory, setting up online instead of just in the back alleys of Renaissance Fairs and the rise of Etsy, intricate costumes have become available to everyone with a dream and a few bucks to spend. I’ve watched plot teams venture into theatrical lighting effects and cosplayers teach us all how to do exquisite makeup on YouTube. read more